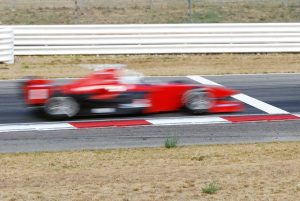 In an industry where success rides on machine performance, teams trust their machines to FlexCom Custom Metal Bellow Expansion Joints.

A major manufacturer of IndyCar and FomulaOne racing engines relies on FlexCom custom metal bellows expansion joints at their dynamometer test cells, where racecar engines are tested to see if they have what it takes to compete at world-class levels.

The engines are tested at the “dyno” cells to determine how optimally they can propel a 1,800-pound vehicle at as many as 240 miles per hour for approximately three hours or more at a time.

Ideally the engines wouldn’t need to run for quite three hours if they are to beat the best times at the Greatest Spectacle of Racing. Regardless, testing engines to such extremes creates some equally extreme conditions that can only be controlled in engine dynamometer cells with top-flight exhaust systems and ductwork.

Dynamometer test cells experience extreme heat and other conditions that must be controlled by machinery befitting the IndyCar 500 Champion-caliber engines that they’re built to test. The engine must be at its best in front of 300,000 spectators at the Indianapolis Motor Speedway, and that means it first needs trial in the best testing environment.

In Dyno Cells, You Must Take the Heat

With high-performance motors running on what can be close to a 24-7-365 basis indoors, dyno cells are a site of extreme heat generation.

From the exposed engine surfaces, exhaust, and cooling systems, a racecar engine can generate more than 1 million BTUs per hour. And in a dynamometer cell the heat is usually generated indoors where it cannot freely escape on its own.

A high-powered exhaust system like a stainless steel flexible exhaust tubing system removes heat from the dyno cell, but the exhaust system in the engine dynamometer cell will experience heating extremes itself. Heat is one of the greatest sources of stress in ductwork, causing metallic elements to expand and become misaligned.

Custom metal bellows compensate for the extreme heat by providing flexibility. Rigid ductwork that normally would become misaligned by consistent exposure to 1 million BTUS per hour, when augmented with custom metal bellows expansion joints, instead provide the flexibility to expand and contract in accordance with the temperature without causing misalignment.

FlexCom metal bellows expansion joints compensate for temperatures as high as 2,500 degrees Fahrenheit. It’s a grade required for testing engines that are intended to cross the Brickyard finish line first.

Movement and Vibration in Engine Dynamometer Cells Can Be Damaging, Dangerous

Heat isn’t the only factor that can lead to misalignment and other damage in dynamometer test cell ductwork, even at world-class racecar engine testing facilities. Stainless steel flexible exhaust tubing systems needs to compensate for movement and vibration as well.

The ductwork and exhaust system are high-powered in their own right. They typically include hoods, dampers, and high-powered power-ducted fans that expel air and fumes at more than 1 million cubic feet per minute. For the highest powered engines, exhaustion may need to occur at more than 1.5 million CFM.

It takes high power to clear the engine dynamometer cell of hot air and keep temperatures ambient, and the high-powered fans and components can cause ductwork to move and misalign. Constant vibrations reverberating along the ductwork eventually reduce operating efficiency, damage components and increase operating and maintenance costs.

The answer to the persistent movement and vibration is custom metal bellows expansion joint. Metal bellows expansion joints compensate for axial, angular, lateral and rotational movement and combinations of these movements, and also are designed for specific load requirements that compensate for vibration without sacrificing load tolerance, thrust resistance or joint reliability.

Carbon monoxide is another critical consideration in dynanometer cells and their exhaust systems. The danger of running car engine in an enclosed garage for only a few minutes is commonly known. At racecar engine testing facilities, even more powerful engines run in an enclosed space for much greater periods of time.

Carbon monoxide extraction is of paramount concern, and it relies on the same ductwork. Custom metal bellows expansion joints become of paramount importance to compensate for heat, movement, and vibration that otherwise would cause damage and misalignment that allows carbon monoxide to escape the system in unintended ways.

Even A Little Bit of Damage Can Make Accurate Testing Impossible

No two IndyCar or FormulaOne races are held under identical conditions, so racecar engine manufacturers need to test engines under a great range of conditions.

In order for an IndyCar to have a shot at the Borg-Warner Trophy, it needs an engine vigorously proven in the testing environment. It’s important to have custom metal bellows expansion joints that compensate for heat, movement, and vibration so that precision testing controls remain in place.

It Does an Engine Good

The process of getting a driver a jug of milk in the winner’s circle at the Indianapolis 500 starts well before the green flag waives. It starts in research and development, with engine prototypes running in world-class testing facilities, and with sourcing the right parts for a champion.

That’s why an IndyCar and FormulaOne engine manufacturer relies on FlexCom, experts in industrial expansion joints since 1991. FlexCom designs and builds each metal bellows to your specifications from stainless steel to handle pressure up to 300 psi, temperature loads up to 2500°F, and the transfer of liquids through joints and surrounding piping.

Well before the gentlemen are encouraged to start their engines, custom metal bellows expansion joints from FlexCom are busy at world-class testing facilities to help ensure the best possible result when the checkered flag flies.